A Note From Our Founder…

On a summer day in 2011 a pilot friend asked me to fill in for him as his plane was in the shop. He’d committed to flying the last leg of a dog rescue mission. I laughed when he said there’d be five dogs, as my plane was so small. He explained they were puppies and I jumped at the opportunity to lend a hand. Little did I know that this day, my eyes and heart would be opened and my life path would change direction.

Once we landed at the destination airport, we were allowed to let the pups stretch their little legs as we got organized. As I approached the door to retrieve papers from the plane, I noticed one pup had left her siblings and followed me. I picked her up, asked if she thought she was coming home with me, she licked my face telling me yes. I named my new pup Piper.

Piper became more than a best friend, she was the inspiration for founding FlyPups. Her rescue called attention to the terrible plight thousands of dogs face down south being destroyed, victims of overcrowded kill shelters. Saving the lives of these dogs, and enriching the lives of adoptive families could all be accomplished with a rescue flight. So I bought a bigger plane and got to work.

I looked her in the eye and promised Piper that day that I’d do whatever I could to bring her friends safely to loving homes while offering education on the importance of spay/neuter practices.

Piper may have been rescued by me, but her story served as an inspiration leading to the rescue of hundreds of dogs each year. FlyPups has expanded our mission to help our nations’ veterans as well as victims of natural disasters. This is our story. FlyPups …to the rescue! 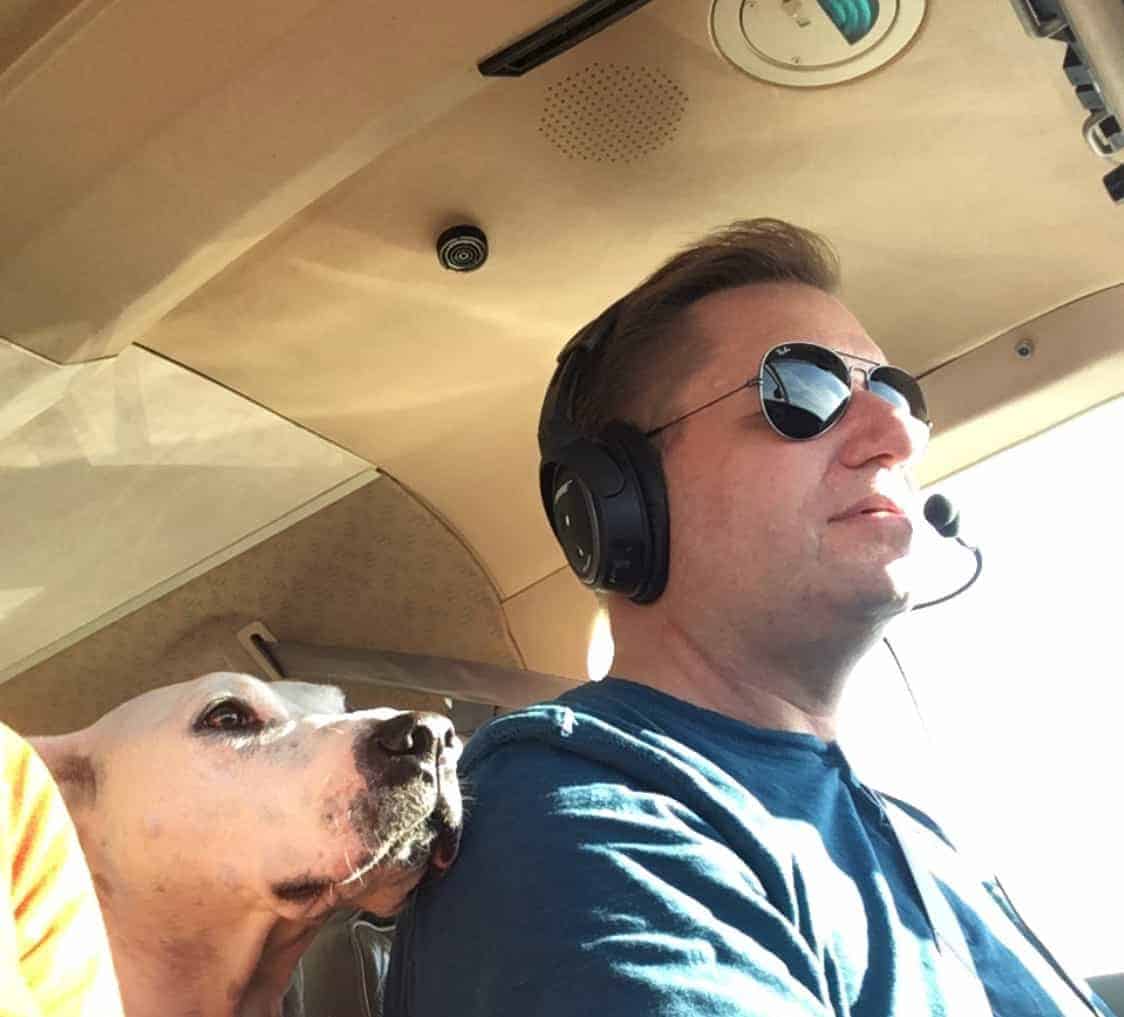 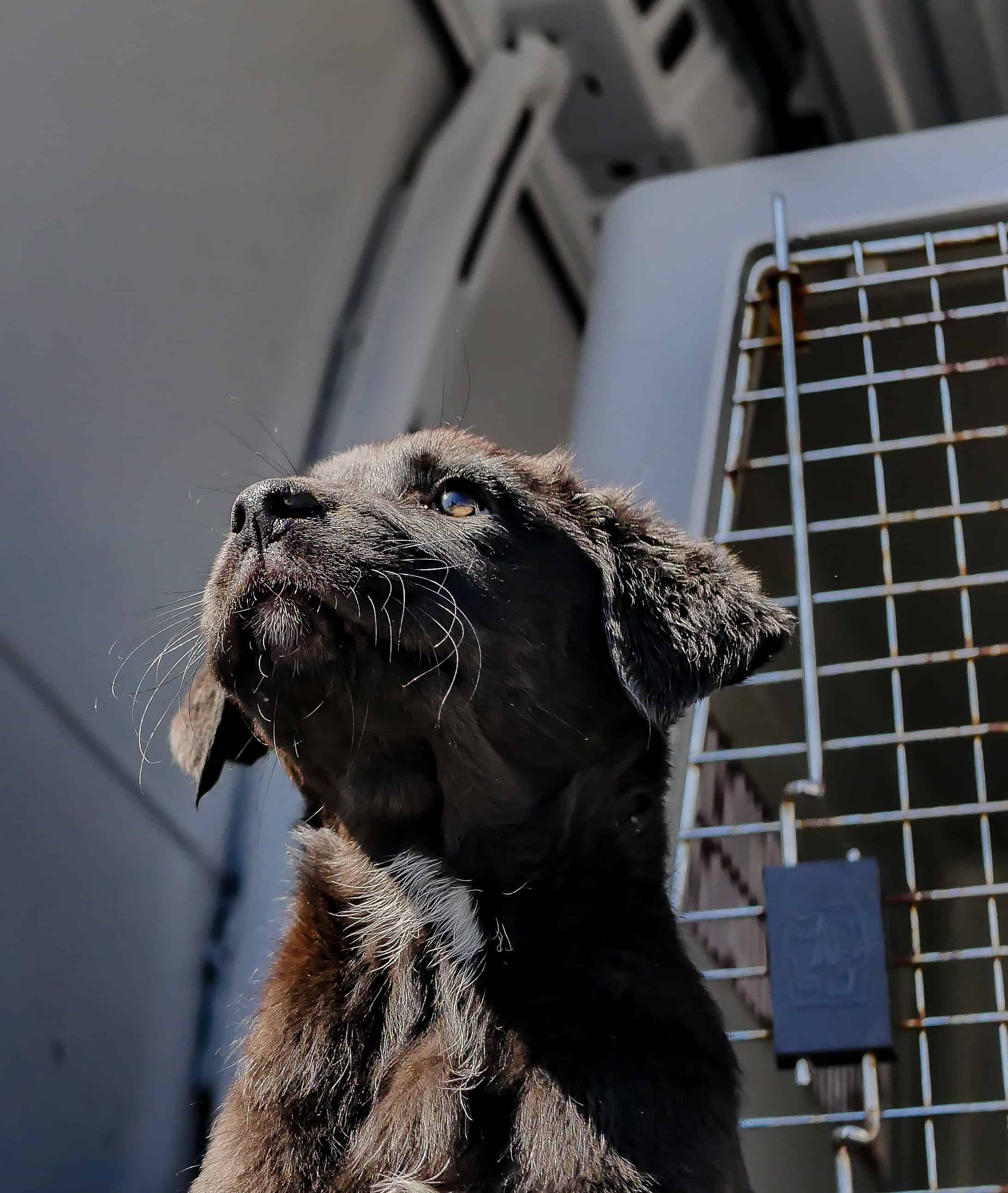 While the number of dogs euthanized each day is tragic, what’s worse is the knowledge that many of these dogs would be welcomed into loving homes if only they could be relocated. FlyPups is dedicated to transporting dogs from desperate situations to non-kill shelters where they can be nurtured and prepared for adoption. The utilization of aircraft to transport dogs decreases travel time, in some cases from days on the road to hours in the air. Often the dogs being transported, while safe to travel, have been through circumstances rendering them fragile and the stresses of a lengthy road trip could compromise their physical and emotional health. Our desire is to deliver these dogs safely and efficiently to those shelters prepared to welcome them as they begin their new lives.

When disaster strikes, FlyPups responds. In the aftermath of floods, hurricanes, and other natural disasters, the community shelters are quickly overwhelmed with the surge of misplaced pets. These often overcrowded shelters are approaching maximum capacity at any given time, and a surge of this type means dogs will be destroyed. It becomes urgent that we bring relief to these shelters, careful to take only the shelter dogs, making room for local families pets. In doing so the families can know their beloved dog is safe and close as they seek permanent relief from the temporary housing they’ve been provided.

Additionally, FlyPups utilizes the opportunity to deliver aid to the community. Instead of flying to the affected area with only empty crates, FlyPups collects donated provisions and delivers these supplies while bringing relief to the shelters.

FlyPups is honored to participate in the transportation of dogs trained to aid US veterans. We’ve partnered with nonprofits who provide companion & service dogs for soldiers who have so bravely served.  We understand some of the best emotional support provided to our veterans can come from the love and companionship of a dog. These dogs are trained to aid the veteran in whatever their needs require. Some will help the soldier acclimate to his or her surroundings providing relief from hyper awareness. While others will wake the soldier if the dog senses they’re having a nightmare. These relationships often allow the soldier to return to a better quality of life.

FlyPups transports the dogs to the training facilities and then upon graduation delivers the dogs to their veterans. These missions are some of the most emotional and hold a special pace in the hearts of FlyPups volunteers.

How We Do It

Our Board & Crew Members

While it would be impossible to name all those who make these missions possible, as we’d estimate more than twenty contribute to each relocation, we’d like to highlight a few of our key players. 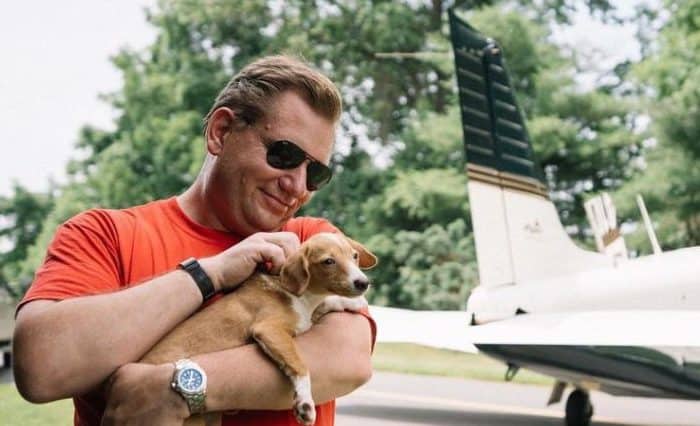 Matthew’s been flying for more than twenty-five years, holds his Airline Transport Pilots certificate and is also a Certified Flight Instructor.  Combining his passion for flight and his love of dogs he’d be hard pressed to find a better way to spend his spare time.

While each mission presents with different challenges, all leave him feeling fulfilled.  He enjoys all aspects of each mission, however the gratitude from the dogs is certainly his favorite.

Of the more than a thousand dogs he’s flown, Matthew has adopted two of his passengers and is currently enjoying the company of his lil girl Charlie (pictured above). 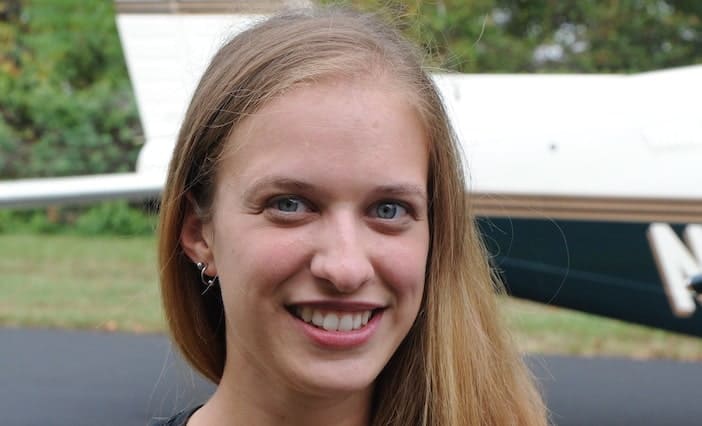 Sarah has been with us since the beginning, aboard the first mission in the old plane. Sarah is a most formidable “co-pilot” and stewardess to the dogs.  Additionally, she has passed her written as she progresses with lessons toward her Private Pilot certificate.

With certifications as an Animal Cruelty Investigator & Animal Control Officer combined with years working as a vet tech, she brings a great deal of experience to each flight.

Sarah’s compassion for dogs and can-do attitude have been incredible assets to the dogs and missions.   with the day-to-day activities. 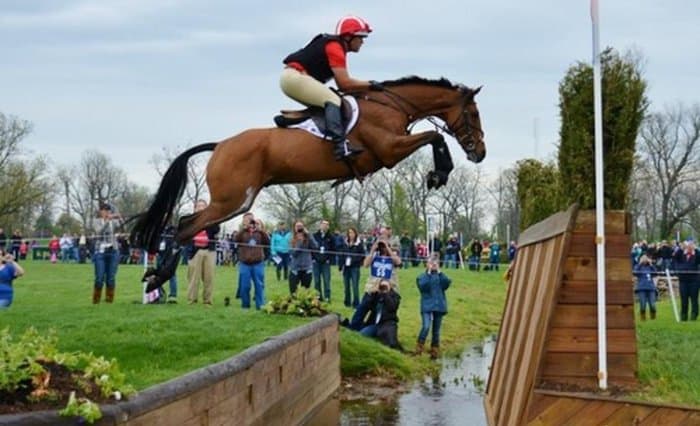 Buck shares a love and admiration of all animals large and small.  From the horses he trains and competes to his Jack Russell Terrier, Buck appreciates how special these creatures are in their devotion to their caretakers.

With his experience operating a sole proprietorship, and a strong desire to improve the lives of dogs, Buck is a true asset. 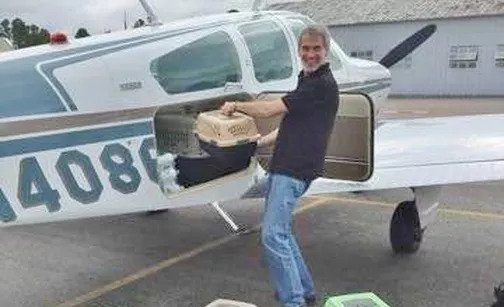 Anthony Archambault is a volunteer pilot with FlyPups, and as such has rescued many pups from desperate situations.  He holds his Private Pilot certificate land & sea, as well as an Instrument rating.  With decades of experience, Tony still pilots the same Bonanza he’s been flying since 1978.

Tony’s ‘day job’ is printing and he owns Budget Print in Clark, NJ.  Tony is an expert in each aspect from design to finished and provides FlyPups with everything from pamphlets to banners and more. 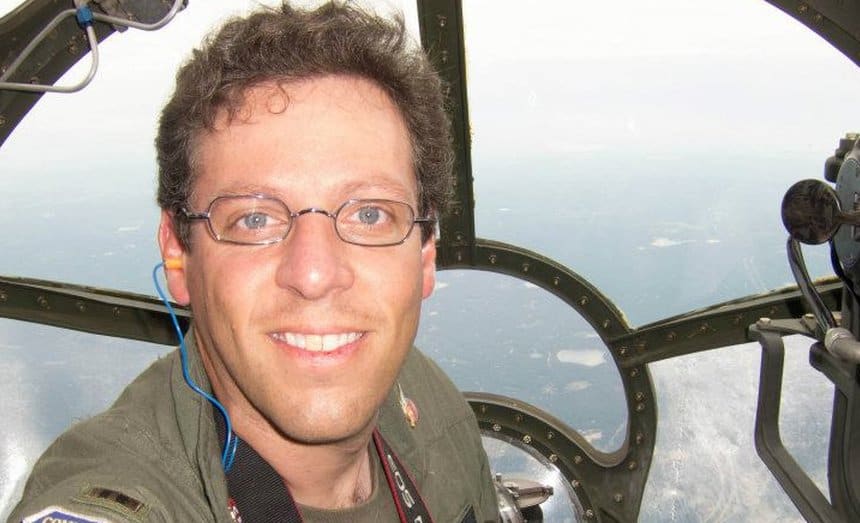 Steve Schapiro is a public information officer for the NJ Department of Transportation. He has worked in government, journalism and the non-profit arenas.

He earned his Private Pilot certificate when he was 17 years old and currently owns a 1968 Piper Cherokee Arrow, which his father bought new and picked up at the factory in Vero Beach, FL. 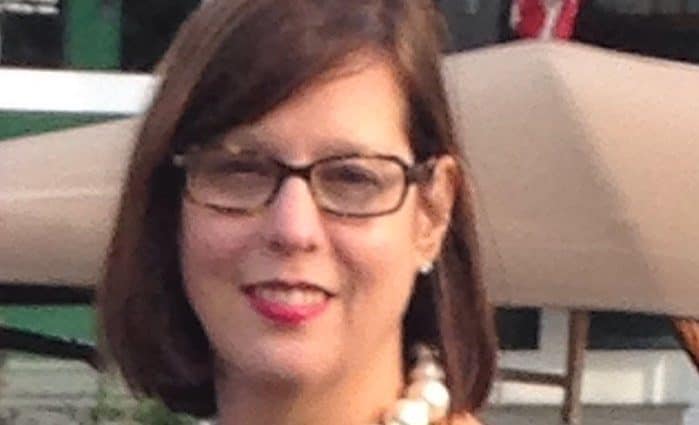 Melissa joined the board in 2018 helping with bookkeeping and so much more.  She has years of volunteer experience with The Junior League of Boston, of Greenwich, CT, and of New York City in direct service, in new members recruiting, in annual appeals, in grant writing in strategic planning.  She participated in Nonprofit Boards ClearingHouse “Leadership through Governance” Training Volunteers for Nonprofit Board Membership” course and is excited to use this knowledge with FlyPups.

She and her husband reside in a little red house along the Black River in Pottersville, New Jersey with their zany dogs Fiona and Chestnut.  She a Certified Public Accountant in her family’s tax practice, has a Bachelors Degree from Lafayette College, a Masters of Science in Accounting from Northeastern University, and a Masters of Accountancy in Taxation from Rutgers University. 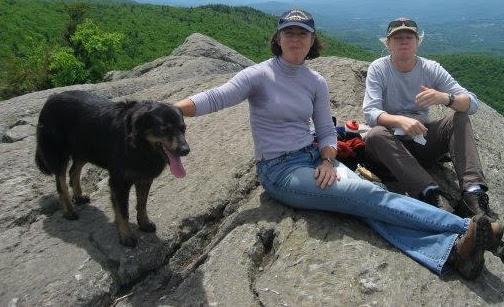 In 1994 animal lover and pilot Lisa Darden was a founding board member of a 501c3 animal adoption center. She helped bring the organization from operating out of a dog pound at the local dump to a modest but efficient building in a centrally located throughway between 2 influential towns, Stowe and Morrisville, VT. They have rescued over 14,000 animals since their inception. Today, in along with her work at animal shelters in VT & SC, Lisa serves on the board of directors for FlyPups.  Additionally, Lisa is a pilot and competes in the equestrian sport of Eventing. 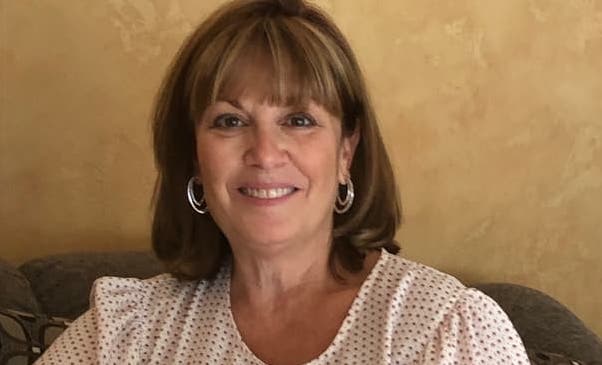 Shari’s passion is volunteering.  She believes that giving back is essential to balancing the injustices in the world.  Once a month she cooks and serves at a soup kitchen.  She and her certified therapy dog, Aspen, an 11 year old Labrador Retriever, volunteer in several places.  They work with children who have been diagnosed with multiple physical disabilities, learning disabilities and Autism.  They participate in many “read to a dog” curriculums as well as multiple stress relief programs.  Shari lecturers on how to use a certified therapy dog in various settings.  She and her husband, Gabe use his TBM to transport dogs to their furever homes.  In addition, she has been teaching Hebrew and Judaic Studies for 20 years.
When she is not volunteering, she loves to spend time with her family, cooking, reading, skiing, practicing yoga and flying with her husband Gabe, to explore new cities. 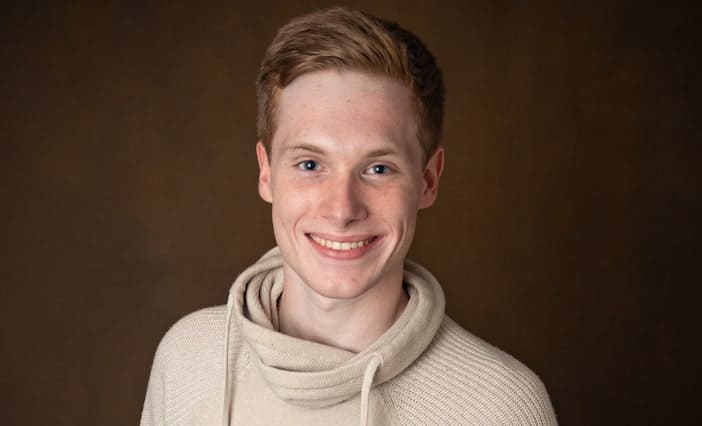 Liam’s biggest passion is learning, currently he studies computer science, with a focus in cyber security, and thanks to Matt he has started his journey as a student pilot. Upon learning of FlyPups, Liam immediately offered his assistance with building a new website. Though he has no dogs of his own at the moment, between family, his girlfriend, and working with FlyPups, Liam is rarely seen without a rescue dog. Liam prides himself on staying well versed on a range of technical topics allowing him to effectively suggest and produce solutions to better FlyPups mission in rescuing dogs.